I’ve got an interesting series of photos to show you today, sort of a follow up to my recent post titled The Hunter and the Hunted. The other day I glanced out the kitchen window and saw a red-breasted nuthatch (Sitta canadensis) frozen in place on the side of the suet cylinder.  In the classic nuthatch pose, facing downward, he wasn’t moving a single muscle.

That simple sign told me there was a winged predator in the yard; sure enough, it only took a few seconds to find a mature Cooper’s hawk (Accipiter cooperii) perched in the big silver maple tree. The hawk’s view of the nuthatch was probably blocked because he was on the back side of the suet. But the little guy wasn’t taking any chances, and continued to “make like a statue” even after the hawk flew across the yard to perch on the fence. 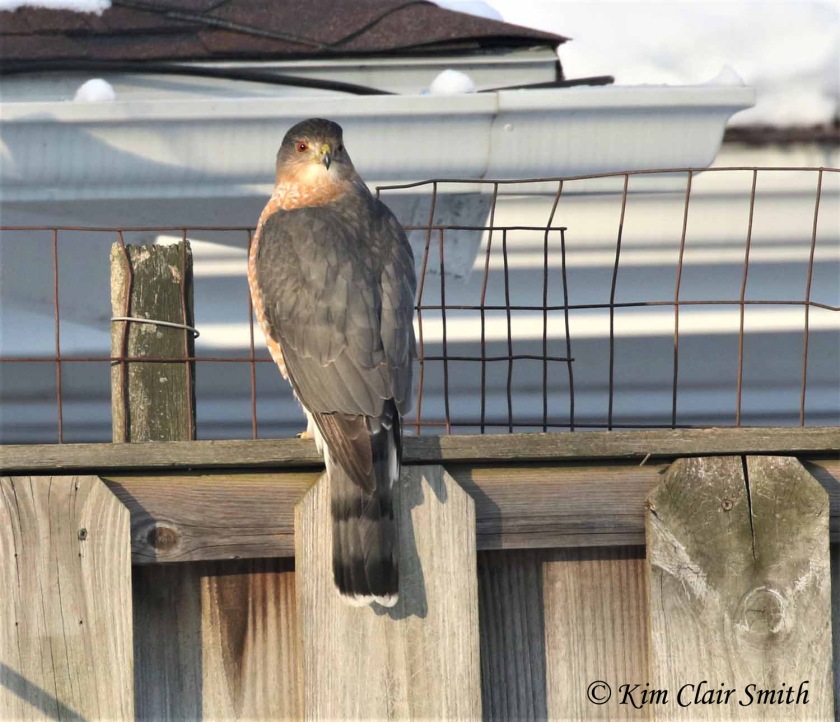 Even from his new location, the hawk couldn’t see the nuthatch. You may notice that this isn’t the same immature hawk that was here the other day. This one is an adult, as indicated by his red eyes and more solidly-colored breast plumage.

After about 45 seconds on the fence, the hawk dropped down behind the large cypress shrub, and the nuthatch still didn’t move. As I was enjoying the drama of this scene, I was also glad to have a nuthatch who wasn’t moving so I might have a chance to get better photos of him, though I was still hampered by the double-paned window.

The hawk remained behind the cypress for at least 15 minutes. I’ve seen several hawks drop down behind there and stay for a good amount of time, possibly feasting on the birds who like to shelter inside. When the snow melts a bit, I’ll have to check to see if there are piles of house sparrow feathers back there.

But anyway, when the hawk had been out of sight for about four minutes, the nuthatch began to move verrrry slowly.  First he turned around and waited for a couple more minutes. 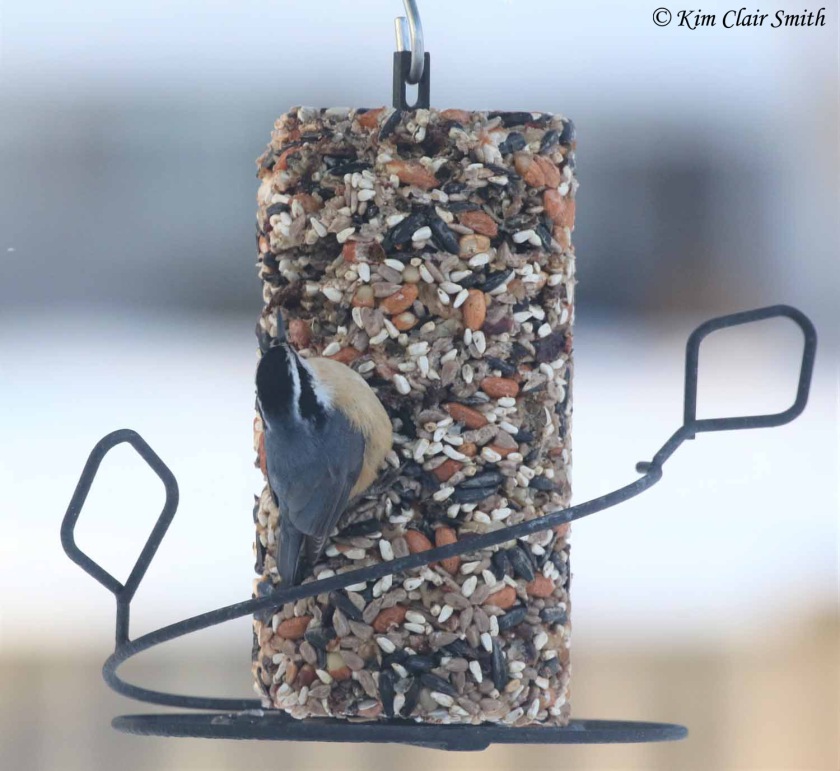 He looked to the left.

Then he looked to the right.

Continuing to be exceedingly cautious, he slowly creeped up and peeked up over the top of the suet.

Finally he felt the coast was clear, and took the opportunity to fly to the relative safety of the big cedar tree.

I don’t know if the Coop would have even bothered with a meal as tiny as a red-breasted nuthatch, but I don’t blame the little one for putting on his cloak of invisibility for a few minutes, just in case.