There’s been a young Cooper’s hawk frequenting my yard recently. I see this species in my neighborhood throughout the year, but their visits become more frequent in the winter when I have the bird feeders out.

An active bird feeder is like an all-you-can-eat buffet for a Cooper’s hawk (Accipiter cooperii). The accipiters are experts at the fast and precise tactical maneuvers needed to zip in and out of trees and other backyard vegetation where tasty songbirds hide.

When I photographed this one the other day, he had a fresh blood spot on his belly indicating a recent meal. Nevertheless, he was still terrorizing the innumerable house sparrows.

Many bird lovers are dismayed to see a hawk taking birds from their yards, and I get it. Nobody likes to see an animal die right before their eyes. And the first few times I witnessed this behavior it upset me too. But having spent so much time with birds over the years, I’ve made my peace with it. Because a hawk needs to eat just like any other bird does, so I can’t begrudge them taking advantage of an easy meal.

Raptors are fascinating birds to study, especially when you get a chance to see them hunting and feeding. I’m excited to be a new volunteer for a raptor monitoring project with Metroparks Toledo this spring, helping to keep track of hawks and owls throughout the nesting season.  I’ll go to an orientation meeting next month, and then be assigned a route that I’ll walk once every two weeks to document any raptor nesting activity.

The photo above shows an adult Cooper’s hawk in my yard last winter. If you compare the hawk in the first picture above, you’ll notice that the younger hawk has yellow eyes rather than the reddish eyes of the adult. The head of the mature bird is much darker, and their breast feather patterns are different as well.

As for the house sparrows that are often the prey of my backyard hawks, I’m ambivalent about them, as are many birders. You see, these birds are not native to North America; they were originally found in Eurasia, North Africa, and the Middle East. The first 8 pairs of them were released in New York City in the mid-19th century, followed soon after with other releases. Immigrants to this country wanted to establish populations of the birds they were familiar with from their home countries, but they had no way of knowing the problems that would be caused by this seemingly harmless introduction.

They quickly established themselves throughout most of North America, often displacing native bird species by their aggressive nesting behaviors.  They begin nesting early in the season, often before the native birds have returned from migration, thus depriving them of their preferred nesting spots. Eastern bluebirds are one of the species that has been hardest hit by the impact of the house sparrow invasion. Ask anyone who monitors bluebird nest boxes and you’ll undoubtedly hear exasperation as they tell you about the house sparrows killing bluebird babies and building nests on top of their dead bodies. If you’d like to read more about this, check out this article from the Cornell Lab of Ornithology.

House sparrows are very adaptable, able to eat a wide variety of foods and to nest in human dwellings. If you’ve ever noticed birds inside your local Costco or other big box store, or noticed nests hanging on the outdoor storefront signs of any business, those are likely to be house sparrows.

These birds are the reason I don’t keep my bird feeders out all year long; there’s a large population of them here and they spend much of their time in my yard. They roost in shrubs in the yard, and arrive at the feeders in noisy flocks, pressuring other birds into looking elsewhere for food. I wish they weren’t such a problem, because they’re handsome birds. Well, at least the males are handsome; the females are more drab.

Here’s a group of them gathered on the rim of a water bucket at a dog park, with a single male on the left.

Finally, here are a few photos of the young hawk walking along the fence, peering down into the sparrows’ favorite roosting spot. He came away with empty talons this time, but I’ve seen Cooper’s hawks jump down into those shrubs and come out with a feathered meal many times. One day I saw two victims pulled out of there, a mourning dove and a house sparrow. I tend to mourn the loss of the dove more than that of the sparrow. 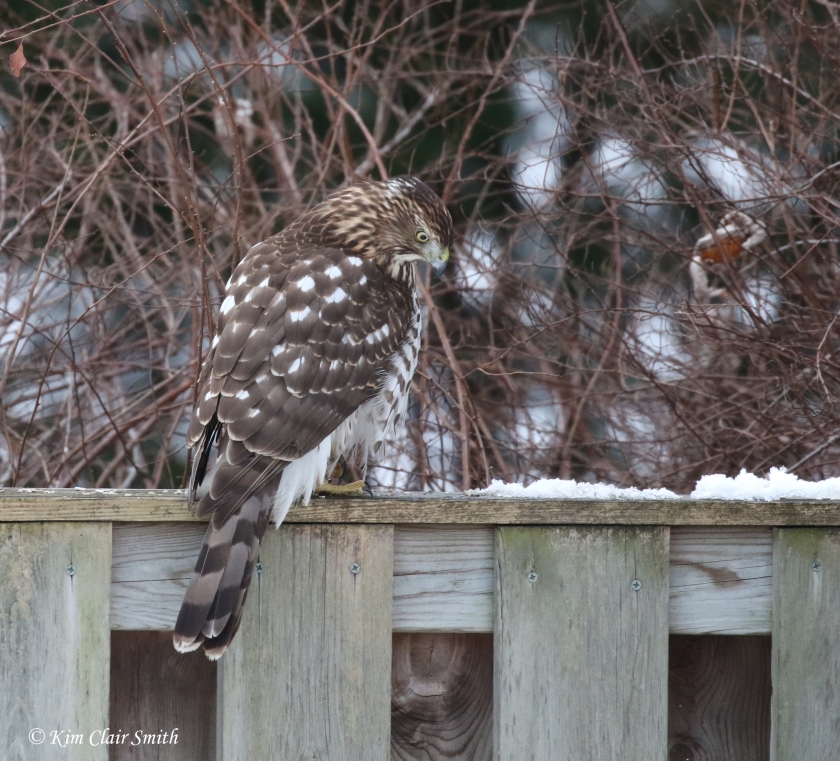 19 thoughts on “The Hunter and the Hunted”