Experienced hunters understand that they’ll have more success if they take the time to learn about the lives of their target species. Someone hunting deer or rabbit needs to know the needs and habits of those animals in order to track them down: Where do they eat? Where do they go for water? Where do they sleep?

And so it is with hunting dragonflies. Of course I’m not hunting them to kill them, but I do need to be stealthy in order to shoot them with my camera. After all, these are insects with a field of vision very close to 360 degrees. so they’ll always see you coming. Your best chances of getting close to them are when they’re so preoccupied with eating or mating that they don’t pay as much attention to you as they normally would.

Right now seems to be peak flight time for Flag-tailed Spinylegs, one of my favorites in the clubtail family.  As their name indicates, clubtails are distinguished, in part, by the enlarged sections at the end of their abdomen. The width of the “club” varies among the species, from barely noticeable to knock-your-socks-off-and-pop-your-eyes-out-noticeable. Just for reference, I’ve shown you two species that don’t have large clubs: a Lilypad Clubtail above, and an Eastern Least Clubtail below.

At the opposite end of the spectrum are species like the Skillet Clubtail and Cobra Clubtail, with massively enlarged clubs. I’ve not seen either of those two species yet, so  until I find one of them, the most impressive clubtail I’ve found has been the Flag-tailed Spinyleg. 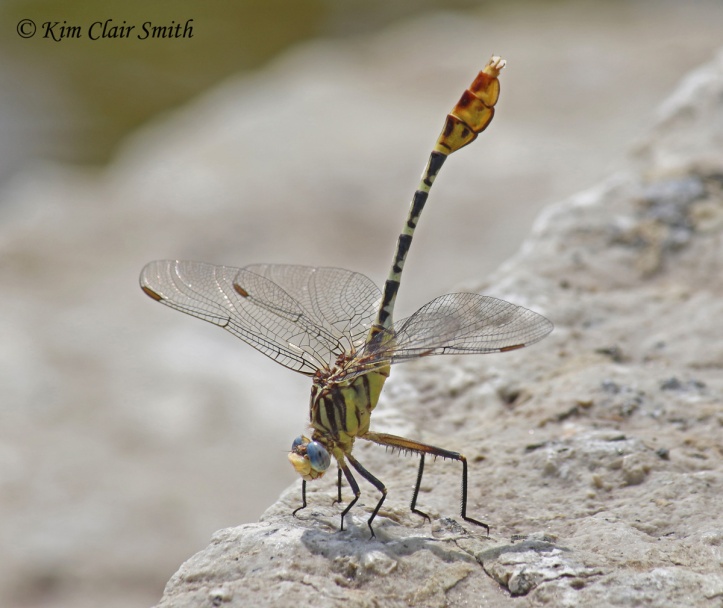 Clubtails tend to rest on the ground rather than on vegetation like some other dragonfly families. They often use large rocks as hunting perches, and one of the best ways to find them is to search the surface of each and every rock along the edge of a body of water.  It’s not really that difficult to track them down, but there’s a slight problem in getting photos of them. You see, since their prey consists of insects flying over the water, they tend to perch with their faces turned toward the water — and away from me standing on the shore. And so that has meant that it’s been hard for me to get photos of their beautiful faces.

But I’ve got a new strategy. I’m hunting them from a kayak now, so I have a better chance of seeing those stunning blue and green eyes as they sit on the shore watching the water. Pretty smart, huh? It’s not a perfect system though, because I’m on the water and constantly moving, therefore making it even harder to hold steady for a sharp photo.  But it’s fun to keep trying, and to see how close they’ll let me get as I slowly drift toward them from the water instead of walking up behind them from the land. Being in a kayak gives me a lower, less-threatening profile too.

I recently discovered a large quarry lake and have been having a ball kayaking around the perimeter hunting for Flag-tailed Spinylegs. The video above gives you an idea of what it’s like to hunt them. You may notice something fly quickly from left to right in the last few seconds of the video — that’s one of the spinylegs. And that’s the reason the video stopped at that point, so I could turn around and photograph him.

The other day I spent three hours out there and saw at least a dozen spinylegs. It was windy though, and often my kayak would be pushed in the opposite direction from the dragonfly I was trying to photograph. It was quite the challenge! Luckily there are some little coves around the lake, so I tucked my boat into those and got some shelter from the wind. A couple times my kayak drifted so close to the odes that it was too close for my lens to shoot them. When that happened I just took the opportunity to sit quietly and watch them up close for as long as they would allow me.

So you know where they got the “flag-tailed” part of their name, but what about the “spinyleg” part? I think this photo explains that pretty well. Wouldn’t it be easy if everything had such a perfectly descriptive name? I had some fun writing about ode names last summer, in a post titled, “What’s in a Name?” I hope you’ll check that one out if you missed it the first time.

Limestone quarry lakes have the most beautiful, clear water. The limestone leaches calcite crystals into the water, turning it an incredible blue. As I drifted lazily along gazing into that azure water, I could almost believe I was in the Caribbean instead of in rural northwest Ohio. 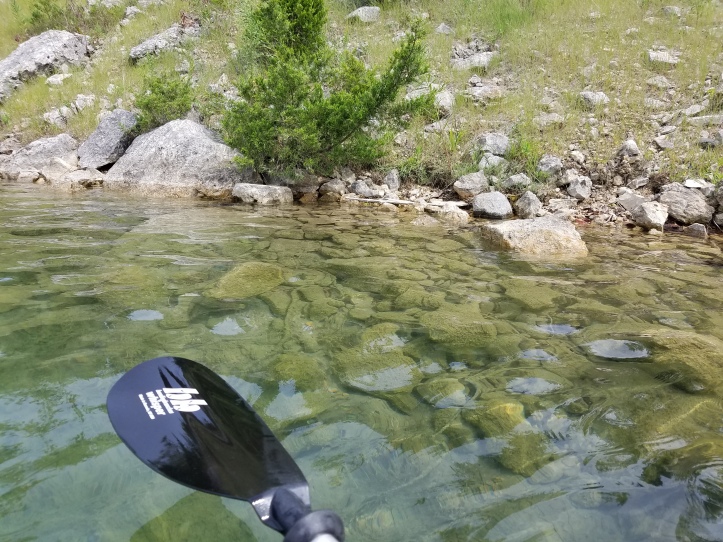 This quarry has several miles of shoreline to explore, so I expect to have many more hours of enjoyment out there. And it seems to be a well-kept secret because I’ve only seen a couple other people on my first couple of visits. There aren’t many places left in this world where you can get space from other people, so I’m thrilled to find this spot close to home. I just wish I’d discovered it earlier in the summer when there were more dragonfly species flying. But that just gives me a reason to anticipate getting back out there next spring.

Writing that sentence made me sigh as I thought about how close we are to the end of summer. It seemed to take forever to get through the rainy spring this year, and once we finally got into summer, it seemed to fly by so quickly. I can’t believe it’s going to be time to pull out sweaters and jeans soon. I love autumn, but I’m so not ready for it yet!