I just had the most extraordinary experience thanks to the kindness of a friend. I’d been feeling down for a few days and was keeping to myself, refusing to socialize with anyone. I knew I just needed some time away from people to get myself re-centered after a couple of bad experiences earlier this week. So I was spending my days with my hands in the soil, transplanting my many native plant seedlings. It was good and fulfilling work, and I could feel myself slowly getting ready to face the world again.

By the way, I read about a study years ago that showed that microbes in soil can actually lift your mood, and my experience seems to back that up.

So anyway, my friend Rick didn’t know I was going through this, but he happened to call today to ask if I wanted to come watch him release his two newly-emerged Giant Swallowtail butterflies. It took me about a half second to say “Yes, of course!” I was so excited I could barely contain myself. Not only did he have those beautiful butterflies to show me, but this would be my first visit to his extensive and award-winning native plant garden. He’s been one of my mentors in my new native gardening project, and so I was just as excited about talking plants with him.

As I arrived at his house, he was standing in the yard holding an aquarium containing the two swallowtails. As I oohed and ahhed over them, he said he had yet another surprise for me. We walked into the back yard and he showed me a freshly-eclosed Hyalophora cecropia, aka Giant Silkworm moth! I almost jumped out of my skin because I’d been dying to see one of these for a long time.

Is that not stunning?! I still can’t believe I finally got to see this species, the largest moth in North America with a 6″ wingspan. And not only that, I was able to let it crawl around on my arm and feel the prickles of its tiny feet! I was rather surprised to notice that as it walked, that gorgeous fat abdomen just dragged along under the wings. I would have expected it to be lifted up. I may need to do some research about that to see if maybe that was just because it was newly-eclosed.

This moth had been in its cocoon all winter long and will live just long enough to mate and lay eggs for the next generation. If you’d like to see photos of the entire life cycle of this fascinating insect, go here.

As with all moths, it had lush comb-like antennae, as shown below. We believe this one is female because the antennae on the males are much larger than those on the female. 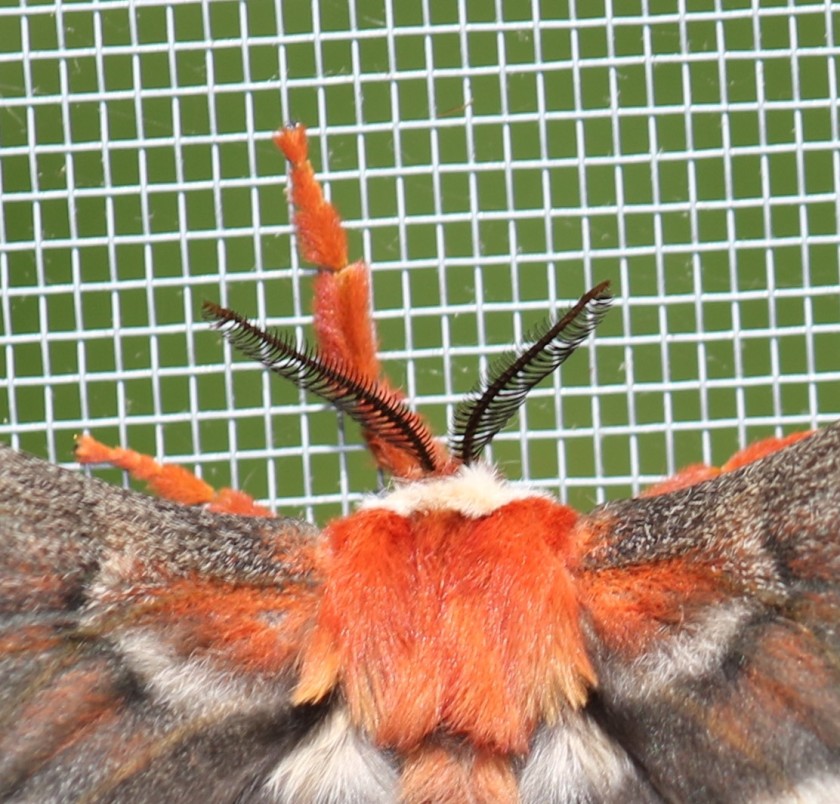 Here’s another Cecropia still in its cocoon: 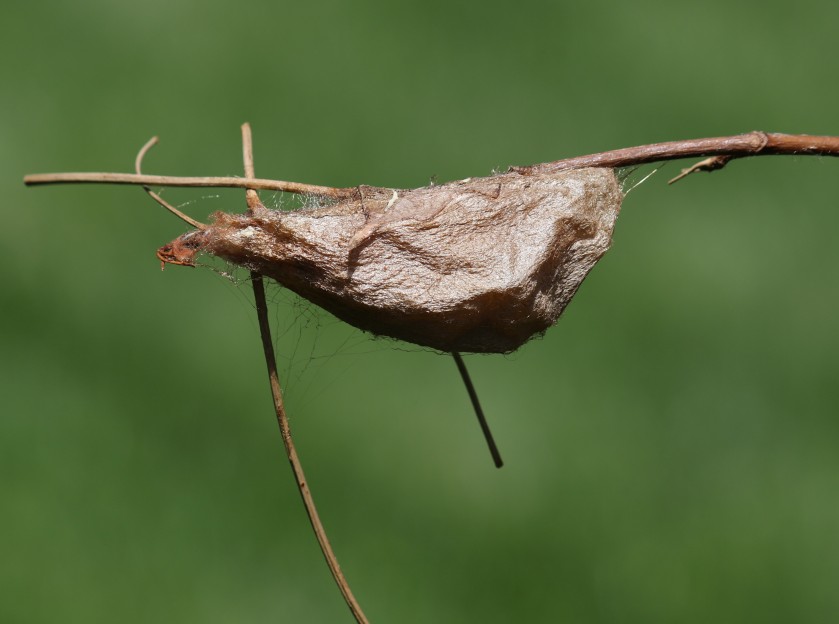 I sometimes forget to make the distinction between a cocoon and a chrysalis. A butterfly emerges, or ecloses, from a chrysalis. A moth emerges from a cocoon. #ScienceTidbit

Here’s one of the Giant Swallowtails after we placed it on a wafer ash tree in Rick’s yard:

Here’s the chrysalis after the butterfly emerged out of it:

The camouflage is perfect, isn’t it? If I saw that branch in nature, I’d probably not even notice the chrysalis. Here’s a short video of the butterfly resting before making its first flight:

I’m incredibly grateful for the timing of Rick’s call today, and that I was able to spend a couple hours soaking up the beauty of his yard and the knowledge in his native-plant-growing brain. And, of course, I left his house with a few more native plants in my arms.

This is proof that, sometimes, one small gesture can turn your day around. The second I saw those crisp new life forms fluttering their delicate wings, I forgot all about the things in the human world that had made me sad. Once again, nature was my therapy.

2 thoughts on “The Wings That Lifted Me Up”