Life has been pretty busy for me lately, as evidenced by my lack of posts here on the blog. I’m sort of frustrated that I’m losing touch with some of my regular readers because I just don’t have time to keep up with anything outside of work anymore. But I’m really hoping to get back to writing more after the Biggest Week in American Birding isn’t absorbing all of my time. At BSBO we’re burning the candle at both ends these days, attending to all the details that make this festival so successful. It’s a lot of exhausting work, but the carrot at the end of the stick is the joyful ten days next month when our birding friends from across the country will gather here on the shores of Lake Erie to celebrate the spring migration. This is very satisfying work, and even when I’m drop-dead exhausted, I’m so thankful to be where I am, doing what I’m doing. 🙂

But what I wanted to write about now is the wonderful afternoon I just had. We had a very mild winter here in northwest Ohio, with only a couple snowfalls of about two inches at a time. But last night we got whopped with more than seven inches of heavy, wet April snow. I wasn’t liking it very much when I got caught driving home in the worst of it last night, but this morning everything was so beautiful. Here are a couple pictures from my backyard: 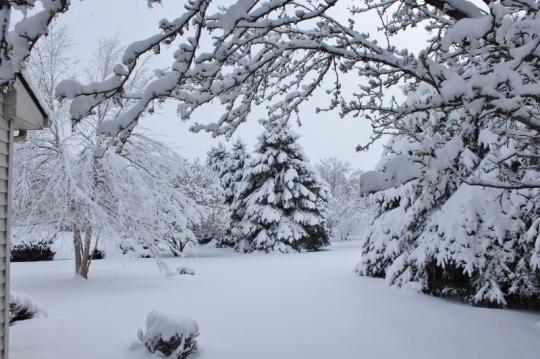 After my driveway was plowed at lunchtime, I decided to go run a couple errands. My intention was to be back home in less than an hour, so I didn’t take my camera (…cue dramatic music that tells you that was a BIG mistake…).

As I ran my errands I noticed how pretty the tree-lined streets were around this little town, and I took a few cell phone pictures. Then I impulsively decided to drive over to Spiegel Grove, the home of President Rutherford B. Hayes, to take a quick walk around their lovely grounds. It’s a pretty place very close to my home, and I’d like to visit there more often. And I knew my cell phone camera would be fine for taking some pictures of the huge snow-covered trees.

As soon as I stepped out of my car I heard a flock of Golden-crowned Kinglets in the evergreens beside the parking lot. I quickly counted at least a dozen of them, and stood there watching them for a few minutes. There were also a couple Eastern Phoebes in that spot. I was already kicking myself for leaving home with out my camera. But it seems that I get the best views of birds when I don’t have my camera, so I decided to just enjoy the birds and make mental images. (I’m sharing a couple bird pics from previous years, just so you can see which species I’m talking about.)

I loved this tunnel of trees, even though it was a bit treacherous when huge clumps of heavy snow came crashing down near me several times.

And halfway down this tunnel of trees, I looked off to my left and saw a female Cooper’s Hawk just sitting calmly in a tree, surveying the area below her. There were a couple phoebes flitting around here too, and I wondered if one of them would become her next meal. Later, when I returned along this same path, a male Cooper’s had joined her on the branch. I was happy that I was able to share those birds with a woman who happened along just about then with her dog. I pointed out the hawks and let her use my binoculars to get a good view of them. And then we had a nice chat about a variety of things, including small town living and the process of adjusting to life after divorce. She gave me some tips on places to go and things to do, which I appreciated. It was really nice to meet someone who could relate to some of the things I’ve gone through in the past couple of years.

…and just around a bend I saw a woodpecker fly into a tree beside me. I stopped and lifted my binoculars, expecting to see a Downy Woodpecker. But what I saw was even better because it’s a bird I’ve only found once before: a Yellow-bellied Sapsucker. It’s not that uncommon really, but I think it’s a really cool bird. It’s easy to mistake for a Downy or Hairy Woodpecker if you don’t look closely enough, but it’s got that bright red throat patch that gives it away, and the yellowish tint to the belly area too (thus the name). I stood there smiling from ear to ear, wishing there’d been someone with me to share this bird with. But it’ll just have to remain “my” bird for now. And that’s okay. (Sorry I don’t have any good pictures of sapsuckers, but you can find lots of them on the Google-machine.)

I took a short video as I walked through that tunnel of trees earlier. It’s a little jiggly while I’m walking at the beginning, but I wanted you to hear the crunching of the snow under my feet.

Isn’t that pretty? I wish all of you could have been there to experience this quiet moment in time.

7 thoughts on “April in NW Ohio”