These are Familiar Bluets in their heart-shaped mating wheel. These damselflies belong to the insect order called Odonata, and we often shorten that to “odes” when talking about them among other ode lovers.

And below is a photo of one of my favorite woodland wildflowers, Dicentra canadensis. As you might imagine, it’s related to the pink bleeding hearts that are common in gardens, but the pink ones are not native to North America. This plant has little yellow bulblets that look like kernels of corn, thus the common name of Squirrel Corn. I hope to get a photo of those sometime this spring.

Insects and wildflowers are much more interesting to me than cultivated flowers and candy so I just wanted to present the Nature Is My Therapy version of Valentine’s Day. And by the way, is it spring yet?!

I got home yesterday afternoon and am probably going to need a couple days to recuperate from all the excitement at the Biggest Week in American Birding. This year’s festival was the best yet, and I have lots of photos to share with you all. But for today I just have a sequence from an intimate moment in the lives of two Killdeer.

Near Magee Marsh, there’s an ice cream shop with a big gravel parking lot in which Killdeer often dig their little “rock nests.” Early in the week I had a great time watching some recently-hatched babies running around the edges of this lot under the watchful eyes of their parents.

Unfortunately, nesting in parking lots has its hazards, and I saw one of the parents of this brood get run over by a car just a few minutes after this photo was taken. It brought me to tears. These birds aren’t always noticeable, and I imagine many of them lose their lives like this. I think all four of the babies ran to safety though. I didn’t see them anywhere in the area in the days following that, so have convinced myself they’re okay with the remaining  parent.

My last day in Ohio was really hot, so I stopped back over there to get an ice cream cone. As I sat in my car eating it, I noticed two adult Killdeer sitting on the edge of the lot, about two feet apart. Occasionally one of them, presumably the female, got up and worked on a little indentation she was forming in the gravel. She would pull a rock to the side and then squat down in it and wiggle around, using her body to shape it better.

After watching them for a few minutes and seeing them settle down again, I laid my car seat back and closed my eyes for a short nap. But a short time later I heard them making some agitated noises, so sat up and got to see this: 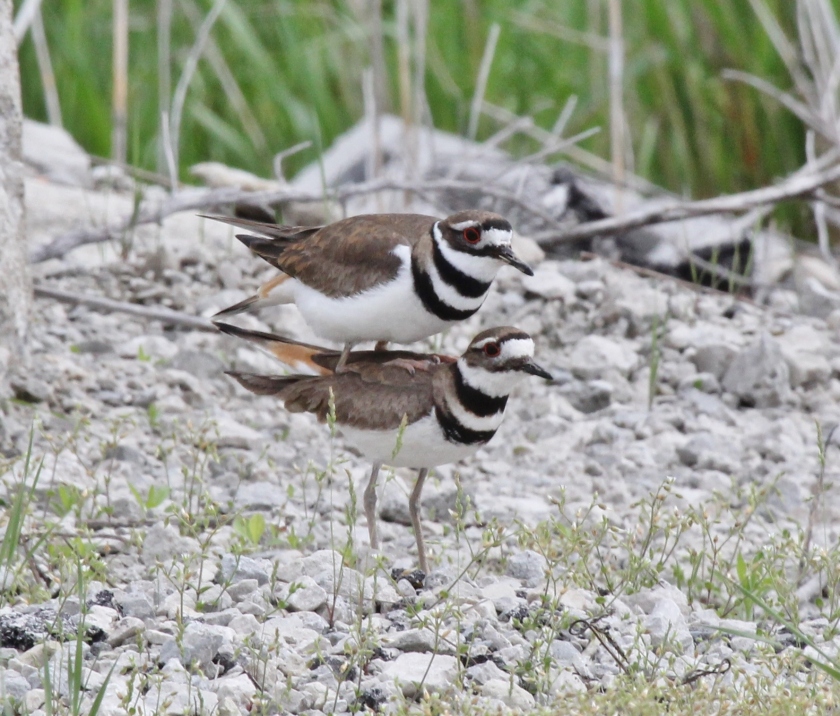 Ah, I think they’ve got it now… 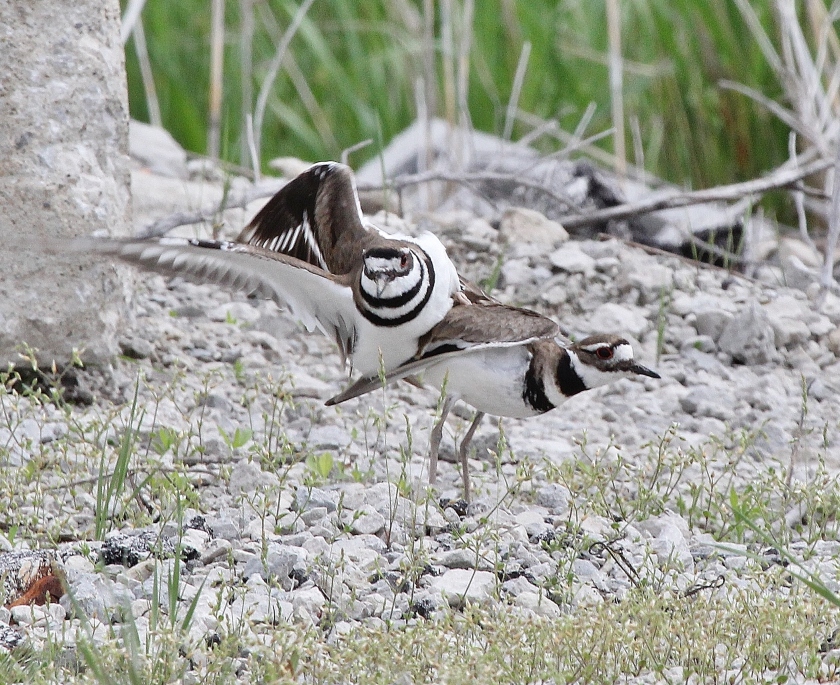 Nobody saw that, right?

So if all goes well there will be more little puffballs running around that parking lot soon! Next time I plan to show you the rest of the photo series of that Great Blue Heron eating a fish (see the preview in my previous post). And, of course, there will be warbler photos…stay tuned!