Our yard is a crazy busy baby bird nursery right now and I absolutely love it. I can’t get anything else done because all I want to do is watch the nesting robins and all the other exciting activity out there. And I’ve got lots of pics to share with you, so let’s get started with an update on the robins.

Today I got my first glimpse of actual live babies in nest #2. I’d been worrying about what was going on in that nest since I hadn’t seen much parental activity. But they’ve got at least two youngsters in there and they look about a week younger than the ones in nest #1.

I set up my tripod in the usual spot about 25 feet from nest #1 today. I sat quietly, occasionally taking photos and short videos. After about 20 minutes Mama Robin appeared on a branch directly over my head, looking down on me. She wasn’t agitated, just a bit curious. I quickly snapped a couple pics of her, afraid she was going to drop something wet and slimy on my head to show her displeasure at my being there. But nothing landed on me, and she left after a minute or two and resumed worm-gathering in the lawn (which you’ll see in a video below).

Here’s a short video of the nestlings being fed today too. I suggest you click the “full screen” button to see the biggest version of their cuteness, and turn up your volume too. The parent arrives with food at the 38-second mark….

Isn’t that the cutest thing you’ve seen all day? I just know those babies will be out of the nest this weekend. (Well, I don’t know it, but I expect it…) I hope I get to see them take their first awkward flights. 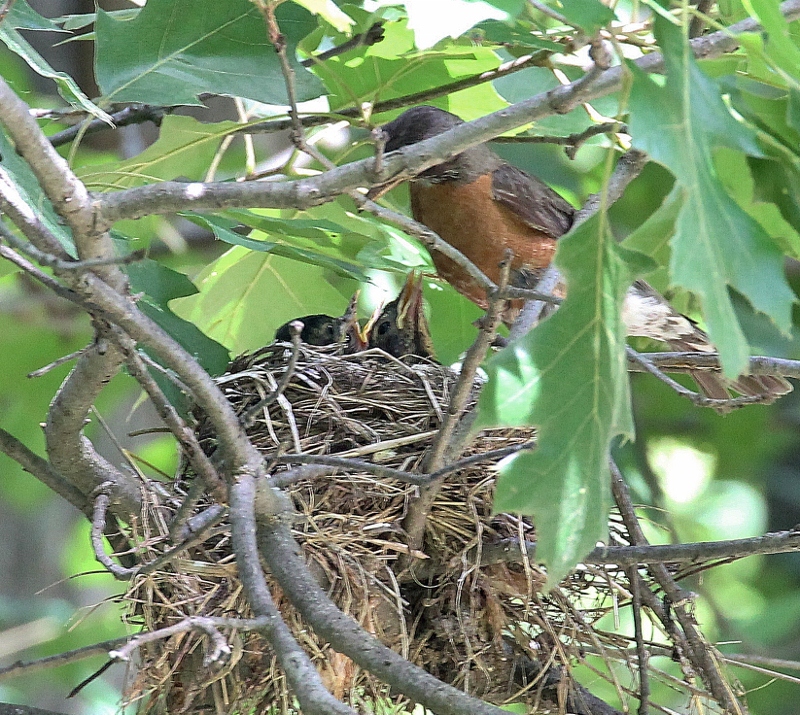 And then we have the Blue Jay babies. Oh my goodness, you haven’t seen anything until you’ve seen a recently-fledged Blue Jay chasing its parent around, loudly squawking to be fed. They’re so noisy. Today I saw five of them at once — one parent was feeding two juveniles and I think the other two must have been from a separate brood. All five of them were interacting with each other up in the trees, but it’s hard to see who’s doing what in all that chaos.

Now here’s something interesting. If you pay attention to birds in your yard, you’ve probably seen this before:

In case you don’t know what’s going on in this photo, let me tell you a little about the Brown-headed Cowbird. They are brood parasites, which means that they lay their eggs in the nests of other species. The Cowbird egg usually hatches before the eggs of the host species, and due to that timing and the fact that the Cowbird babies are bigger than the host babies, the Cowbird ends up getting most of the food while the other babies sometimes don’t survive. It’s a raw deal for the hosts (in this case the Chipping Sparrows), but a bargain for the Cowbirds — they don’t have to build their own nest or raise their own young. Every time I see a tiny little Chipping Sparrow running around the yard trying to satisfy the appetite of the larger Cowbird, I wonder how they manage it. And I never see the sparrows feeding any young of their own species, which is sad.

Cowbirds were a big part of the reason the Kirtland’s Warbler population took such a nose dive in the past couple decades. The warblers have made a comeback partly because of an aggressive program to control Cowbirds in their breeding areas (they are trapped and killed).

So every year we see the Chippies feeding their hulking Cowbird babies. But this year our yard is also home to a Northern Cardinal nest that was “borrowed” by the Cowbirds. I was very surprised and disappointed to see this the other day:

Apparently we aren’t going to see any adorable Northern Cardinal babies in our yard this year either. I had a bad feeling about this year’s nests when two pairs of Cowbirds were regular visitors to our feeders for the entire month of June. Oh well, better luck next year I guess. But even as youngsters, the Cowbirds are making a nuisance of themselves. Witness this Cowbird photobombing my pic of a family of Northern Flickers as they eat ants in the gravel:

I learned something about Northern Flickers today too. I thought these were all males because of the black mustache stripes on their faces; females don’t have the stripe. It turns out that both male and female juveniles can have the black marking on their face. But I saw one of these birds feeding another one, so I think this is a male parent with two young. Seeing three Flickers is a rare treat for me. I took some video of them but it was pretty shaky so I don’t think I’ll upload it. I almost get a headache from watching it myself. You’ll just have to trust me that they’re cool birds.

And finally, here’s another video showing what good providers our Robin parents are. They had a feast at this particular feeding!