I had planned to write about my visit to Lynx Prairie after Odo-Con, but time is getting away from me and it seems every day brings something else new and exciting that I want to share.  I’ve got a huge backlog of things to write about — and perhaps I’ll still write about Lynx Prairie later — but today I want to tell you about a recent day that was very special to me.

I’ve been on the board of Toledo Naturalists’ Association for about a year and a half now, and have often felt that I should step up and serve as a leader for one of our many field trips. But I was nervous about not having enough experience or knowledge to be a “good” leader, so I didn’t speak up and volunteer. At our board meeting last August, I was asked to lead the annual dragonfly field trip this year and, caught off guard without a good excuse, I agreed to do it. In the ensuing nine months, whenever I thought about it, I got a little bit nervous. Would anyone show up? Would I show my ignorance when I couldn’t answer all their questions?  But I determined to be as prepared as I could, and to bring my natural enthusiasm and hope that would be enough.

On the designated Saturday I arrived at Wiregrass Metropark to find a half dozen people already there waiting for me, and we ended up with 19 people on the walk. I was so pleased at the good turnout, and happy to have many friends there to support me on my first leading experience. Those friendly faces eased my nerves quite a bit, and I started off the morning by giving the group some basic facts about dragon- and damselflies and showing them the field guides I use. I had obtained a supply of the excellent dragonfly field guide pamphlets from the Ohio Division of Wildlife, and handed those out to people who wanted them.

The plan was to spend two hours walking the 0.6-mile loop trail around the lake looking for odes and anything else interesting we could find. I was worried about the weather, because it was mostly cloudy, which isn’t optimal for finding flying dragonflies. As ectothermic insects, they can’t generate their own body heat and must rely on the sun to give them the energy to fly. I’m always amazed at how quickly they respond to the sun and clouds on a day when the clouds are moving a lot. I can be watching dozens of them flying over a pond in the sunlight, and then a big cloud covers the sun and they all disappear almost instantly. Then in a few minutes when the cloud moves past the sun, the bugs start flying again pretty quickly too. It’s really fascinating to see.

Our walk started out a bit slow, but very shortly things picked up and we had a grand time with good looks at more than a dozen species.  I knew people would love seeing the flashier dragonflies, like Twelve-spotted Skimmers (below) and Calico Pennants (above).

But I especially enjoyed showing them the tiny little damselflies that flit around in the grasses, like this Double-striped Bluet. I explained that you have to train your eyes to watch for the movement of “little blue needles” in the grass. It was fun to see their joy when they finally locked in on one of them and saw how small they are. This one, for example, is only about an inch long:

And this Emerald Spreadwing was a real crowd pleaser too:

Here’s a pic of the baskettail we were looking at in the photo above:

This experience was gratifying for me on two levels: First, because everyone seemed to have a really good time, and, second, because it helped me overcome my fear of putting myself out there as a leader.  I learned that I don’t have to have all the answers, and that enthusiasm can more than make up for any lack of experience. And I’ve got enthusiasm in spades when it comes to odes.

I seem to find a way to bring dragonflies into just about any conversation these days. Which is how I ended up volunteering to start an odonata monitoring program for Metroparks Toledo. Back in the very early spring, I was meeting with their research supervisor to talk about my work in their raptor monitoring program, and I happened to mention my love of dragonflies. She asked if I’d be interested in helping them track the odonate populations at one of our local parks. And I instantly said, “Yes, of course!”

The park happens to be Wiregrass Lake, the same one where our field trip took place.  Wiregrass is a newer Metropark, having only opened to the public in 2015. Prior to the park opening, my friend Rick Nirschl made frequent visits to the site to study dragonflies, and he provided Metroparks Toledo with a great deal of initial data about the odonates on the property, as well as suggestions for managing it to protect their habitats. Largely due to his efforts, Wiregrass has become known as the Metropark with the largest number of odonate species. Since the park’s opening, though, there has seemed to be a decline in the variety of species as well as overall numbers. And that’s what prompted this effort to gather more data.

Over the next few weeks, we discussed what the park system wanted to achieve and then we set up a monitoring protocol loosely modeled on those used to monitor butterflies. We divided the park into transects, and once each ten days I go there and count the number of each species present. I’ve found that counting dragonflies is much more difficult than counting birds or even butterflies, but I’m doing my best to get an accurate representation of the populations. 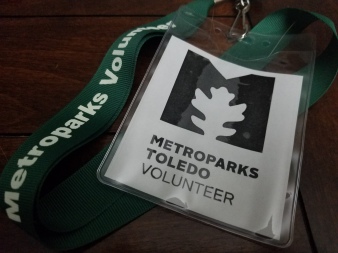 Two years after moving to Toledo, I continue to view our Metroparks as one of the best parts of my life here. There are endless opportunities to volunteer in the park system and I feel like a valued member of the community when I participate. Just this morning I spent two hours with other volunteers (from my Wild Ones Oak Openings chapter) helping remove invasive honeysuckle and buckthorn at Wildwood Metropark. It was 90 degrees in the morning, and it was hard work, but the results were clearly visible when we were done. And that felt good.