The weather here in northwestern Ohio has turned colder and wetter as we enter the depths of autumn. Humans turn to furnaces and fireplaces for comfort and survival, and insects have their various methods of doing the same.

This year I’ve been raising a polyphemus moth caterpillar (Antheraea polyphemus). I was given about a half dozen of the tiny early instar caterpillars back on August 23. They were feeding on maple leaves when I got them, but they can feed on a variety of tree species, so I was able to change them over to elm leaves. I have two maple trees but they’ve been trimmed so high that I can’t reach the leaves without a ladder. The elm tree has enough low-hanging branches that I could reach more fresh leaves each day.

I was excited to begin this adventure with a species I’d never raised before. Raising monarch butterfly caterpillars (cats) is a relatively quick and easy project, as they only feed for a couple weeks before going into their chrysalis form. I knew the polyphemus moth cats would take a bit longer, but I didn’t know much about what to expect along the way.

As it turned out, there were some surprises. The first was that I would only end up with one caterpillar. I’m not sure if the little guys somehow escaped the enclosure or if they ate each other, but after a couple weeks, there was only one left. You may remember that I wrote about my experience with milkweed tussock moth caterpillars back in August, in which I believe they cannibalized each other. You’d think that would have made me more cautious with this species, but I guess I assumed that the tussock moth cat behavior was some sort of anomaly. And besides that, these guys were so tiny and had enormous amounts of food available to them, I couldn’t imagine they would eat each other.  I don’t think they could have escaped from their enclosure either. But whatever happened, I ended up with just the single caterpillar after a couple weeks.

I fed him fresh elm leaves each day and waited  eagerly for signs of impending pupation. And waited. And waited.

Near the end of September, he started to turn a darker olive green at the head end. I hoped that meant he was almost ready to make a cocoon, but it didn’t. I also wondered if he was sick or had been parasitized somehow. But after a couple weeks like that, he turned back to his bright green color and continued eating.

Before you go on, if you haven’t done it yet, I suggest clicking to enlarge one of these photos so you can fully appreciate the body structure of this fascinating insect. I just love the brown alien-looking face, and the colorful bumps that adorn much of the body. And the backside, which I’ve come to call the butt flap, where the relatively large pellets of waste are ejected. You can see one of the “pellets o’ poo” on a leaf in the background of this photo.

I took him out of his enclosure on Tuesday to take some more photos, and this turned out to be his very last photo shoot. Is he not amazing?! Look at those gripping feet! 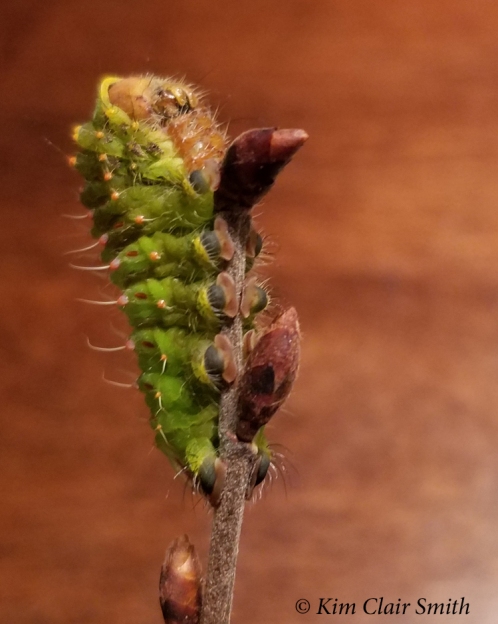 Take a look at the various dots of color along the abdomen in this photo. There are some with hairs (or setae) coming out of them, and then there’s a row of brownish spots without hairs; those are the spiracles. The caterpillar doesn’t have lungs like we do, but instead breathes through those spiracles. And by the way, if you’d like to read much more detail about the life cycle of this moth, check out this site from the University of Florida.

And it wasn’t until yesterday — finally — that he crawled into a dried elm leaf and began spinning silk to enclose himself. This photo was taken around 10:00 in the morning. Notice a few strands of silk on the left end of the leaf.

And this one was taken when I got home around 6:00 pm.

And I took this final photo this morning. 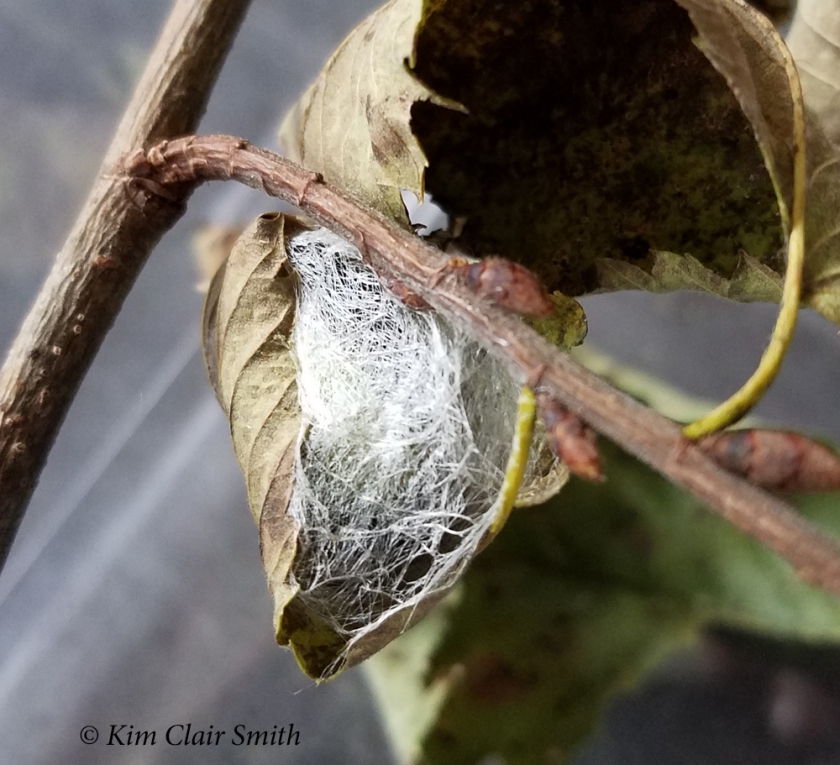 He’s tucked in there nice and cozy now, and will spend the winter and early spring “napping.” And it’s weird, but I don’t quite know how to think about him in this phase. With monarch butterflies spending such a short time in their chrysalis form, it’s easy to imagine that they’re actively transforming into butterflies each day. But with these guys, I have no idea what happens in that cocoon for so many months. Does he stay in this caterpillar form, only transforming into a moth right before emerging in the spring? Or does he begin the transformation as soon as he’s wrapped up? I’d like to know the answer to that, but I also love wondering about it, letting my imagination run with the possibilities.

I’ve now put him in the garage for the winter, along with the four black swallowtail chrysalises that are wintering in there. Both of these species need to be exposed to the cold of winter so that their emergence in the spring will be at the same time as the rest of their species. That’s important so that they can find mates. The polyphemus moth doesn’t even have mouth parts to feed, so it will live as an adult moth for less than a week, just long enough to reproduce the next generation.

I’m anxious to see the moth and the butterflies eclose from their winter abodes next year. It’s going to be so hard to wait. I can imagine trudging into the garage all bundled up in February to get the snow shovel and seeing this cocoon tucked in the corner, with the caterpillar doing whatever it’s doing in there. I think that will bring a smile to my face no matter how much I hate shoveling snow.  #FindingTheJoy