Sigh. I was in the process of writing a very pleasant post about some lovely dragonflies, but something more important has come up, prompting this brief subject detour.

Three times recently I’ve seen posts by friends on Facebook proudly proclaiming “victory” because they’d killed a snake in or near their home. The posts look something like this: “Me 1: Snake 0,” as if it’s some sort of competition…or even a war. They usually go on to describe the weapon they used to murder the poor animal, and then lament the mess of blood they have to clean up afterward. And these posts are usually responded to with cheers from their friends congratulating them for their bravery. Never once does anyone ask if it was a venomous snake or was threatening them in any way. That doesn’t seem to matter. All that matters is “off with its head!”

I get that lots of people are afraid of snakes, I really do. I’ve been startled by them many times on my walks, as they suddenly slide across a path and slither into a meadow. I don’t like that feeling of being startled. But this attitude of killing every snake just because, well, it’s a snake…well, that bothers me deeply. I think if people took the time to learn more about snakes they wouldn’t be so quick to act with aggression. So that’s why I’m writing this today, to urge everyone to just slow down and think about these fascinating animals.

I know many people will have stopped reading this already because they feel a sermon coming on. And I guess there’s nothing I can do to reach those people who aren’t willing to reconsider their views. But for those who are open-minded enough, I decided to write a little bit in support of snakes, and to suggest ways to overcome that all-too-human instinct to decapitate them and then want a medal for it.

And by the way, I’m not trying to say that you should welcome snakes into your home, not at all. They need to be removed to the outdoors, gently and safely, by someone who knows how to do that. This is about the indiscriminate killing of snakes outside, in yards and gardens.

Okay, let’s do this. First of all, I find the best way to overcome any fear is to educate myself about whatever it is I’m afraid of.  The Ohio Division of Wildlife has a fantastic series of guides to help us learn about the various types of animals in our state. Your state may have something similar. A quick perusal of the snake section in their Reptiles of Ohio Field Guide tells me that there are 28 species of snakes in Ohio and only three of them are venomous. Here’s their page on the Eastern Massasauga, for example: 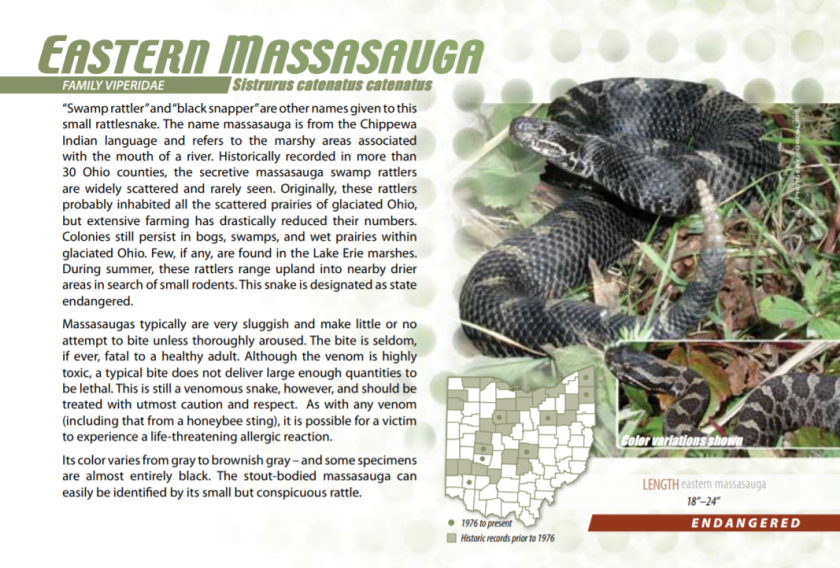 They also give you tips for determining if a snake is venomous or not:

This little booklet has helped transform my fear into curiosity and wonder at these beautiful creatures. And even if I’m still “afraid” of venomous snakes, I know that they prefer to get away from me and will usually only strike if provoked. I guess I’m more respectful than afraid, really.

So, now we’re armed with knowledge about which snakes are venomous, and therefore we know that none of the others should be feared. At all.

But there’s more…not only are they not to be feared, they are desirable animals. One of my friends who killed a snake recently has also been concerned with rodents in her garden. The irony of this was not lost on me because I know that a snake will take care of that rodent problem for you, lickety-split. (Now there’s a phrase from the early 19th century for your enjoyment.)

Not only do snakes control rodents around homes, but they do it for free! And they don’t destroy the garden by digging holes either (although they do use holes dug by other animals). They don’t spread diseases. They don’t harm your plants. And they don’t want to see you any more than you want to see them. They just want to be left alone to live their quiet, unobtrusive lives.

A few years ago I tried to sketch a garter snake I saw on the beach in Michigan. I’m not much of an artist, clearly. But the process of trying to draw this one forced me to look at it much more closely than I’d ever done before. And when you look closely at them, they’re incredibly beautiful. Worthy of admiration rather than scorn, in my humble opinion. Could you catch a mouse or frog if you had no arms or legs? Didn’t think so.

I just wish we could all be more appreciative and accepting of wildlife instead of killing every insect or reptile that dares to come near us. Anyway, that’s all I have to say about that.

Thanks for reading. Back to dragonflies soon. 🙂