Last weekend’s trip to Indiana’s Jasper-Pulaski Wildlife Area for crane-viewing didn’t turn out exactly as hoped for due to some extreme weather conditions. Of course I knew the weather forecast in advance, and even made a half-hearted attempt to back out of the trip, but Jim responded with an admonition about not being a sissy.  That was just the kick in the pants I needed, because one of my primary goals in life is to not be a sissy.

So once we got there we were determined to make the best of the situation, and persisted through rain and cold north winds to find the best photo subjects we could. Since the largest numbers of cranes are found near dawn and dusk, the lighting was also a challenge. And since I’m still learning to use my new camera, there were some times I couldn’t change settings quickly enough to get certain shots. But enough with the excuses. Despite all of that, I do have a few things to show you.

This is the viewing platform that overlooks the area where the sandhill cranes congregate each morning and evening. Unfortunately, this lovely photo isn’t representative of the rest of my results from the trip, which were all taken in less-than-optimal conditions.

I really like this 30-second video I shot in the pre-dawn light one morning. It shows lots of the birds practicing their courtship dancing moves. And although the lighting is poor, it still gives you a taste of what it’s like to see and hear large numbers of cranes at their daily social gathering.

And although I have many in-flight shots of these birds already, I couldn’t resist trying to get some more. In particular, Jim and I both love the moments when the birds are making the transition from flight to solid ground, dropping their gangly landing gear legs while still hanging in the air. We noticed that some birds would lower their landing gear while still fairly high in the sky, while others would wait until much closer to the ground. That difference could be something to do with age and experience, perhaps.

In my past writing about this I’ve described them as looking like giant marionettes falling from the sky, but this time I was struck by a new image: the Wicked Witch’s flying monkeys from the Wizard of Oz.  You know the scene when she sends them all out to attack Dorothy and her friends in the woods, right?  This mental image was triggered not only by the visual spectacle, but also the cacophony that accompanied their descent from the cold November sky. I can’t stop smiling when I think of it that way now.

One of the few daylight photos I could salvage was this one. I took a series of rapid shots as one crane dropped down into this small gathering in a grassy field, and got many images of his wings in various positions. This one is my favorite because the wings are fully extended, giving an excellent impression of the enormous size of this bird.

In-flight silhouette shots were the easiest to create in low-light conditions, and I really like these two.

One morning I was tracking the flight of these ducks across the pre-dawn sky and was ready when they crossed in front of the moon. This is one of my favorite shots from the weekend.

When we weren’t at Jasper-Pulaski, we spent time driving around surrounding areas shooting trees and other nature scenes. The rain had provided us with lots of opportunities to use the moody fog in our compositions. 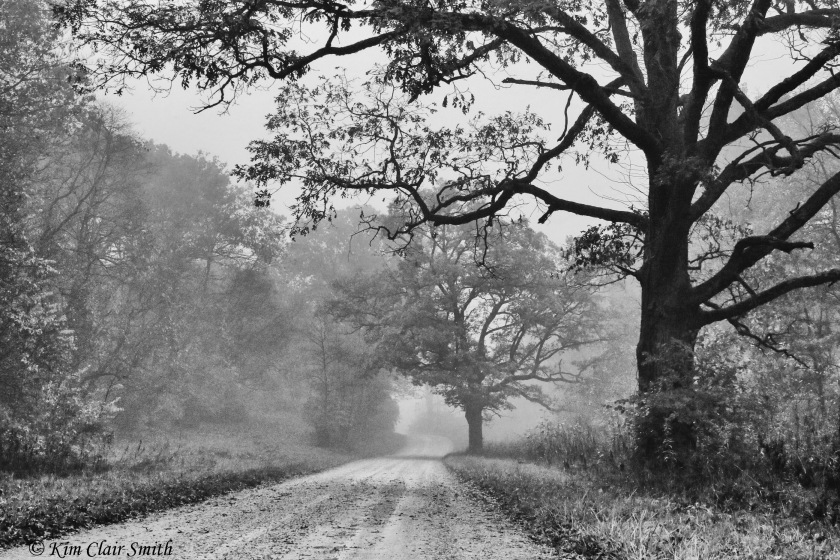 I’ve been enchanted with the photographic possibilities of trees for many years. I usually seek out isolated trees, as in the first photo above. But this scene was great too, with the structural interest of the big oaks, the curving country road, and the fog in the air. This one was edited using a NIK filter, thanks to Jim’s excellent suggestion. I could (and quite likely will) spend hours playing with these filters on my photos. 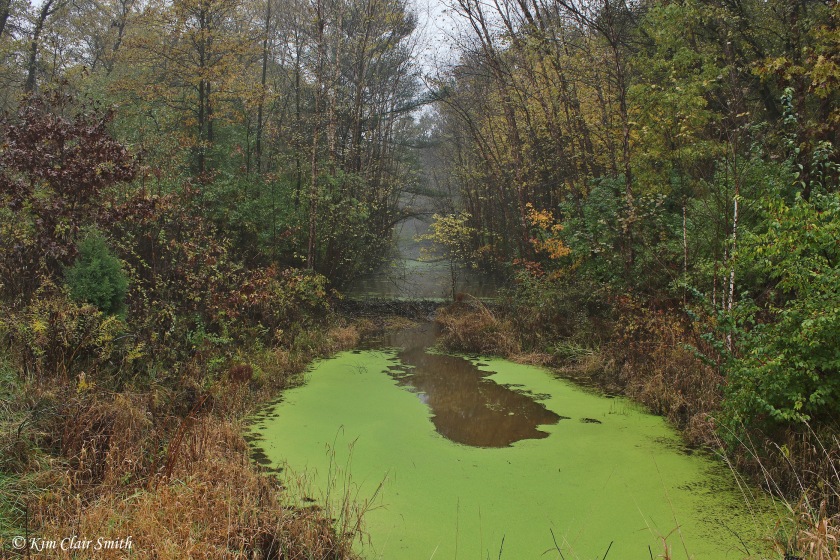 The bright green of the algae in this scene was a welcome and cheerful display of color on a rainy day. Notice the beaver dam crossing the waterway just behind the algae.

Finally, here’s a scene we shot under threat of lightning and pouring rain.  I think it was worth it.

I’m glad to find out I’m not a sissy after all. 😉 I had a great time and learned a lot on this trip, and will be better prepared for my next challenging photography outing.

10 thoughts on “Making Hay While the Sun…Doesn’t Shine”