I’ve mentioned that this spring and summer have been a time of flower exploration for me. Whereas in past years I  might travel to find certain bird species, this year I traveled around northern Ohio to see our various wildflowers as they bloomed.  I was enthralled by the early spring woodland flowers like Dutchman’s Breeches and White Trillium. Then I was kept busy by the abundance of summer blooms in both woods and meadows — things like the milkweeds, ironweed, coneflowers, and countless others.

And now, as we somehow find ourselves already near the end of September (how did that happen?), I’m pleased to discover that there’s still a surprising variety of fall-blooming flowers. The asters and goldenrods are the most obvious and abundant, often blanketing entire meadows. But there are other late-bloomers out there that I’d never even heard of before this year.

I recently had the opportunity to spend a day exploring some of our Lucas County nature preserves with a botanist friend. Our primary goal was to find and photograph three species of gentians — Bottle Gentian, Fringed Gentian, and the state-endangered Soapwort Gentian.

I’d seen photographs of these beauties but had never seen any of them in person, so was eager to go on this quest.  And oh what a rewarding day this turned out to be, as we found all three species — thus my Gentian Trifecta!

I’ll start with my favorite, the Fringed Gentian (Gentianopsis virgata). Thoreau also found them lovely, comparing the blue of these flowers to that on the back of a male bluebird. These stunning flowers only open when the sun is shining, and will remain tightly closed on a cloudy day. When we found this plant it was early enough in the morning that it wasn’t fully opened yet. But when we passed it again about an hour later, it was wide open so we could better photograph the beautiful interior structures and patterns.

Notice those blue lines on the interior of the flower? Those are basically a sign telling bees that “the pollen is this way!”

The second species found on this expedition was the Bottle Gentian (Gentiana andrewsii). This species keeps its petals tightly closed at all times. So, I know you’re wondering how it can be pollinated if it doesn’t open up, right? Well, it’s usually only pollinated by the big bumblebee, who is strong enough to pry the top of the flower open and slip inside.

The final species we wanted to find this day was the endangered Soapwort Gentian (Gentiana saponaria). This one was a bit more difficult to find, but once we found the first one we looked around and noticed dozens of them hidden among the taller plants in the meadow, a secret treasure trove.

As with the Bottle Gentian, this one keeps its petals closed as well, forcing a pollinator to either pry it open at the top, or chew through from the outside. We did find one or two flowers with holes in the sides, evidence that someone had done exactly that. (Several people have posted videos on YouTube showing bees going inside the closed gentians — here’s one of them.)

We found many more fascinating life forms on this outing, including caterpillars, spiders, and other types of flowers. But since blue was the theme of this day, we were pleased to finish up in a meadow teeming with the stunning Blue-faced Meadowhawks, some of whom were quite easily photographed as they perched on Knotted Rush (Juncus nodosus). 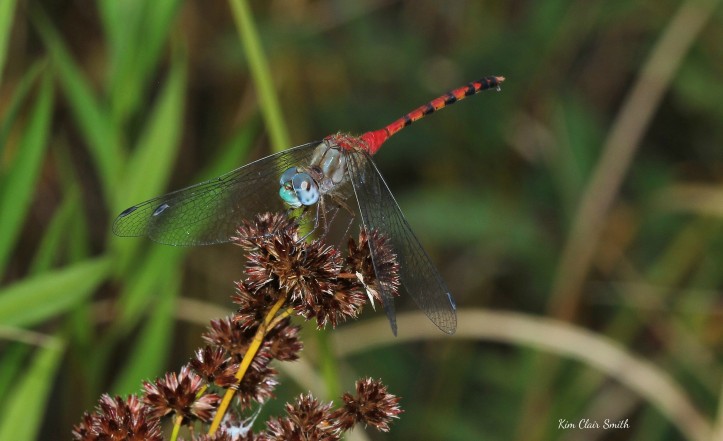 I’m already feeling wistful about the end of this amazing summer, but am reminded that every season brings something different to explore and celebrate in the natural world. And I have a feeling that the predominant color in my next post might be gold or red, as the trees are already beginning their autumn show.