Here in northwest Ohio we’re enjoying some very comfortable fall-like weather lately. After spending most of the summer with temperatures in the 80s and 90s, I’m very grateful for this change that makes me want to be outside all the time. I’ve been riding my bike a couple times a week, and going for more nature walks too. Today I had a bit of a false start when I drove an hour to one of the Toledo metroparks and hardly found any wildlife activity at all. Very few birds or butterflies, and far too many people. (I should have expected the people on this holiday weekend…oops.)

So after putting in a good effort for about 90 minutes, I headed back toward home feeling a bit frustrated. Then I decided to stop at Creek Bend Farm, a place that’s become one of my favorite local birding spots in the year since I moved here. I walked out through the meadow, moving slowly to lessen the chances of scaring off any interesting insects or birds.

I saw quite a few dragonflies but none of them landed anywhere so I couldn’t get photos. The butterflies were more cooperative though, and I saw a Silver-spotted Skipper, some Pearl Crescents, lots of Cabbage Whites and Sulphurs, and a nice Viceroy. And I think I saw a Monarch too, but it was too fast for me to confirm that.

There was a big flock of Tree Swallows moving over the meadow, and a couple times the flock came down low and swarmed all around me. It was a glorious experience!  I took a short video of the wildflowers blowing in the breeze — I think this will help you imagine what it felt like out there today:

Oh, so you’re probably curious about my cannibal encounter, aren’t you? Okay, so the meadow paths eventually wrap around and intersect the path that borders the creek. This is the path I was walking on: 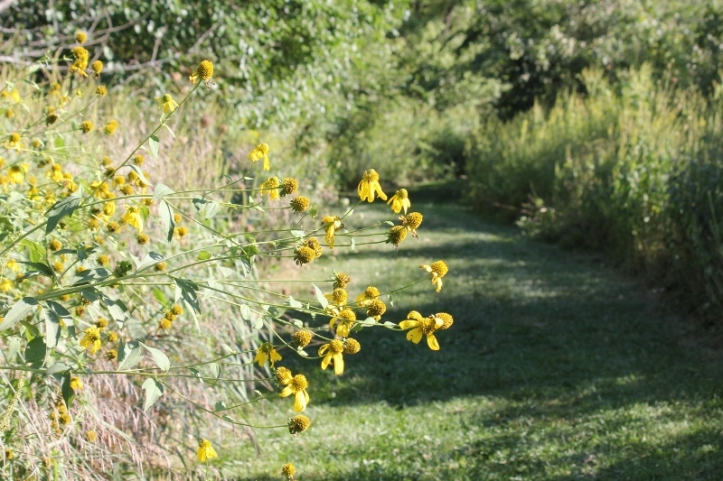 Soon after I turned onto the creek path, I heard the unmistakable buzz and squeak of a hummingbird. I turned around just in time to see this little one fly into a tree and begin a preening session.

I’m assuming this is a female, but it could be a young male. (At this time of year it’s hard to differentiate the two because the juvenile male won’t have his red throat yet.) I always get a thrill when I see a hummer out in “the wild” like this, away from a feeder. So I watched her for a few minutes, snapping photos as best I could manage through the leaves. I thought you might like to see this one because it shows her using her foot to scratch her throat, in a way that reminds me of how cats and dogs do it. I hope you can see it here…the photo isn’t the greatest.

I started to move on down the path but only got three steps away from the hummingbird’s location when I heard another loud buzzing. I looked up and saw a large insect land in a tree beside me. My first impression was that it was a cicada. 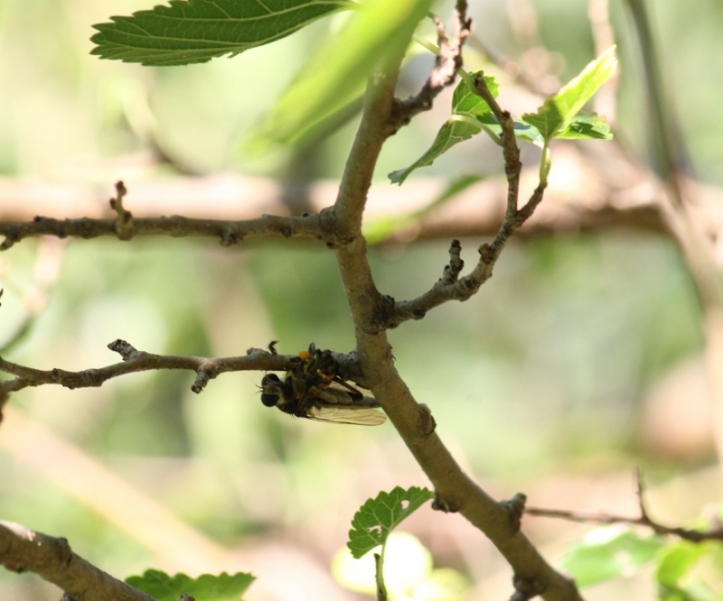 But as I grabbed my binoculars for a closer look, I saw that it was one of the coolest insects ever, a Red-footed Cannibal Fly. And it had a victim already clasped in its legs, a large bee. It had already begun injecting enzymes into the bee to liquify the insides so they could be sucked out. Sounds appetizing, doesn’t it?

This is a type of Robber Fly in the genus Promachus. I’m not positive of the species, but it has red legs so that seems like it fits the Red-footed Cannibal Fly (Promachus rufipes). I was so excited to see this, but I had a heck of a time trying to get a photo in the depths of shade under the tree. Then the fly moved to another branch with better light and I got this one that shows more detail of this creature’s interesting body.

My first encounter with this fascinating insect was at Blue Heron Reserve last fall, where I took this photo of two of them resting on a boardwalk:

They’re a couple of inches long and very intimidating. Especially if you’re a smaller insect! And I discovered that these predators have been known to prey on…wait for it….hummingbirds! So I guess the little hummer in the next tree was very lucky this hungry killer had already found a victim.

Okay, this has been long already, but I don’t want to leave you with visions of gut-sucking cannibals, so here are some pretty dogwood berries. I hope that makes up for it. 🙂