This week marked the one-year anniversary of my move to northwest Ohio. And although I don’t have as much time as I used to for exploring and being in nature, I have managed to find one spot that has become my nearest “go to” place when I need to get away. It’s called Blue Heron Reserve, and it’s a 160-acre park with meadows, fens, and woods. The best part is that it’s only 18 minutes away from my home and I’ve been able to find all sorts of interesting plants and creatures there over the past 12 months.

A recent visit turned up this Cabbage White butterfly feeding on a clover flower. This highly-cropped version shows the pretty green eyes and the long proboscis that he uses to sip nectar from the flower.

I also found quite a few of these wasps crawling on the ground. I haven’t been able to identify them yet, but I think they’re really pretty, don’t you? I like the combination of that rich brown with the gold rings on the body. Hopefully I’ll be able to find them in one of my insect field guides soon so I can read more about them. (Update: I think they’re Northern Paper Wasps, a very common native wasp in Ohio.)

I also found a fly that I don’t remember ever seeing before — this is a Tiger Bee Fly. I think the wing markings are really pretty. This fly was large, probably an inch long. I found one of these hanging around on our mailbox at the office the next day, and was excited that I knew what it was right away.  I learned that this fly is a parasitoid of carpenter bees. That means that it lays its eggs at the entrance to carpenter bee nests, and the larvae eat the carpenter bee larvae. A parasitoid is different than a parasite because a parasite doesn’t necessarily kill its host, whereas a parasitoid does actually kill the host (prey?) animal. Interesting stuff, isn’t it?

Oh, and look who ran across the path in front of me! This little mink was too fast for me to get a good photo, as he hesitated for only about a second before disappearing into the meadow. I’ve only seen a few mink in my life, so it’s always a thrill to catch a glimpse of these elusive mammals.

Another butterfly, a Summer Azure. I stood there with the camera focused on this one for several minutes, hoping to get a shot of the pretty lavender wings opened. Alas, I didn’t get that shot, but I’m pleased just to get any shot at all because these little purple creatures don’t often sit still for me.

More of the one-mile long recycled plastic boardwalk around the meadow. It looks like the park maintenance crew might have been overzealous in killing vegetation along the edges…not sure that’s really necessary in an area like this, but I can’t be sure of what their reasons might be for this.

On this day I found several bullfrogs in the small spring-fed pond inside the meadow loop. I’ve always been unsure of my ability to differentiate between Green Frogs and Bullfrogs–until now. This is a Bullfrog because the glandular fold wraps around the tympanum (that’s the round spot on the side of its head that functions as a sort of external eardrum). On a Green Frog the glandular fold would continue in a straight line down the back. That makes it really easy for me to tell them apart now. Cool. Here’s another larger Bullfrog: 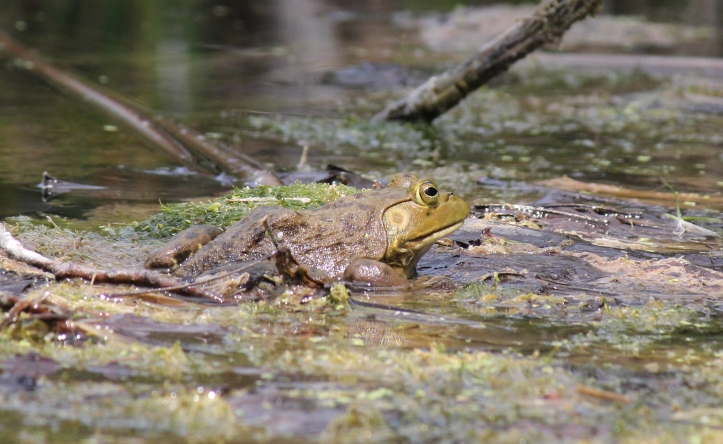 I took lots of photos of wildflowers too, hoping to identify some of them later. Maybe I’ll share some of them in another post. The bird activity was slow on my recent visit (because the temperature was in the 90s), but I still saw a couple beautiful male Indigo Buntings singing, and lots of Tree Swallows lined up on the power lines. The swallows are beginning to “stage” for migration now, which means that it’s common to see larger numbers of them gathered together, waiting for some signal that it’s time to head south. It’s

always bittersweet when the birds start to show signs of leaving us for the winter. It was just a few short months ago that we so eagerly anticipated their return for the breeding season, and now they’re finished with that important business and getting ready to go again. But fall migration is a long process, so there are months of excitement ahead as various groups of birds come back through here on their way down from Canada….the shorebirds are showing up here already, the warblers are coming, and it won’t be long before it’s November and we have ducks galore.

Sometimes I think I’d like to live in a more moderate climate, someplace where it’s always 70 degrees and sunny, you know? The extremes of hot and cold in this part of the country are a challenge to deal with sometimes. But then again, without our four distinct seasons we wouldn’t have the constantly changing plant and animal life that makes the natural world so interesting. So I suppose it’s a fair trade. 🙂