Every year when I go to the woods searching for the latest native wildflowers, I’ve got one particular species in mind as my most-hoped-for find: Dutchman’s Breeches (Dicentra cucullaria).

These dainty little pantaloons are common in moist shady woods throughout the eastern US, and are sometimes also called bleeding hearts or little blue staggers.

The straight little stems holding waxy white and yellow flowers rise above the basal clump of fern-like compound leaves as if to say, “Here we are, look at us!” You might think they would stand out and be easy to spot, but that’s not the case. In fact, they’re so tiny that you have to be looking for them or you can easily walk right past them.

Here’s a wide shot for scale — the big tree stump was about three feet tall. The red circle indicates the Dutchman’s breeches:

Now that you have a sense of their size, you’ll understand why I imagine them to be fairy laundry hanging out to dry.

Last year I found an entire grove of them under a magnolia tree…I would have believed it if you’d told me there really were wee folk living in there. They probably scattered and ran for cover when they saw me inspecting their skivvies on the line.

I’m not sure why, but I often find large clusters of this plant at the bases of big trees. Here’s one I found last week: 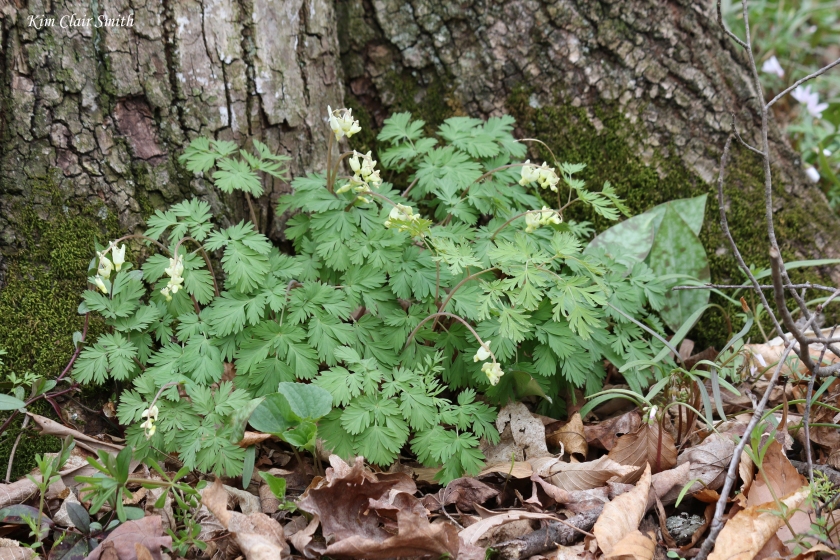 This group had some teeny tiny new flowers in it:

Here’s another shot of new-ish flowers:

I always try to photograph pollinators on wildflowers, and I was doing that on this visit as well. I didn’t see any insects using these flowers, and I discovered that only long-tongued bees like bumblebees can reach the nectar deep inside these blossoms. Other insects have to settle for the pollen, apparently. And ants like to eat fleshy appendages on their seeds, so they carry the seeds to their nests, eat those parts, and discard the seeds, which can then germinate and make new plants. And that’s one way the seeds of this plant are dispersed to new locations. Cool little fact, huh?

I eventually found the owner of this laundry, napping under the clothesline. He sure looks like he’s enjoying life, doesn’t he? I hope you’re finding time to slow down and enjoy the simple things in your life too.

P.S. Happy 50th Earth Day! I marked the occasion by planting a native chokecherry tree in my yard today. 🙂

So what is it now, something like week five of the “new normal”? Or is it 500? It’s hard to keep track of time these days. And if you’re like me, you’ve perhaps been surprised at how many different emotions you can feel in a single day on this roller coaster. But I think I’m starting to get adjusted to the routine-that’s-not-a-routine of my new daily life. There’s some peace in accepting that, I suppose. There’s no point in fighting it, in any case.

I’ve been helped enormously by the emergence of insects, so I can really dig into Kim’s Big Bug Year — finally!!! Every year I watch with envy as my friends to the south start posting their photos of insects many weeks before we have any up here along the shore of Lake Erie. But it’s finally our turn to play, and I’m so grateful that I started this project a couple months ago. And as I’ve been out looking for insects lately, I’ve been surprised to find that I’m rediscovering the joy of birding. Today, for instance, I was walking around a small lake surrounded with woods, when I heard the distinctly beautiful song of a Brown Thrasher. And the encounter was made more special because I was there alone with the bird for a couple minutes, so I could enjoy him without distraction. (You can hear their song here.)

Our native wildflowers are just starting to bloom, and that’s why the insects are suddenly here in larger numbers and easier to find. I spent a half hour observing various pollinators visiting the alabaster blossoms in a bloodroot patch.  One of the insects I see most often on bloodroot is the Greater Bee Fly. Even before I focus my camera on it, I can see the  long, stiff proboscis probing the center of the flower. I always thought a proboscis was used to gather nectar, but I’ve just discovered that bloodroot doesn’t have any nectar; it only offers pollen to its insect visitors. I think I need to investigate this further, because it doesn’t seem possible that pollen could be sucked up by the proboscis, so why is this particular insect so fond of this plant? In times like this I wish I could have a quick conference call with a botanist and an entomologist!

The lovely leaves of bloodroot persist long after the flower is gone, sometimes until mid-summer.

Also among the insects cruising among the bloodroot were hover flies, mostly a single species in the Helophilus genus. I believe they’re H. fasciatus, the Narrow-headed Marsh Fly. Hover flies (aka flower flies) are some of my favorite insects because of their intricate patterns of brown and yellow. This one was enjoying a lovely pink patch of Spring Beauty (Claytonia virginica).

I’ve also discovered a few new-to-me species, like this Unequal Cellophane Bee. I was intrigued by the name, and found that this family of bees are so named because of  a clear substance they use to line their underground nests. I saw lots of them crawling out of their burrows in the sandy soil and flying around low to the ground. Occasionally a pair would “tussle” on the ground, which I assume was mating behavior.

And this Ridged Carrion Beetle was obviously well named, as you can clearly see the ridges on his elytra. 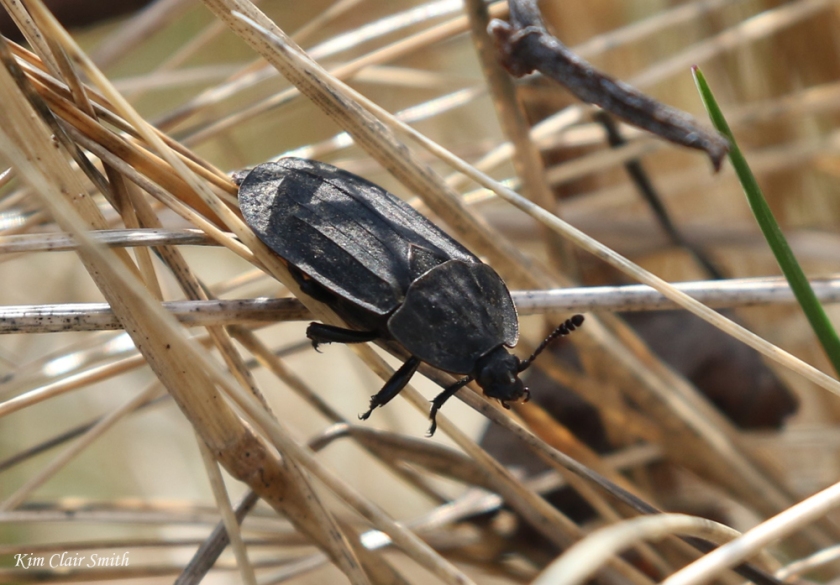 Spiders are out in full force now too, but I know lots of people are squeamish about them, so I’ll only post the one I know can’t possibly be scary to anybody. Meet the most adorable Orbus Paradise Spider, one of the jumping spiders. Jumping spiders have a way of looking at you like they’re as curious about you as you are about them. This was the first time I’d ever heard of this particular group of jumping spiders, and I was so excited I was in my own little paradise as I watched him hopping around in the dead oak leaves for about five minutes. He’s so tiny that each leaf must have been like a mountain to him, but he never faltered, never hesitated, just took a flying leap and kept going. Over and over again.

Come to think of it, that’s probably a good attitude for all of us as we navigate the coming weeks. We have so little control over what’s happening right now, and that can be scary. But maybe the thing to do is just take a leap of faith that everything will work out. And until things get back to normal, maybe we should also make sure to take a cue from this other little guy, and make some time to nap under the wildflowers.