In my first post about the Galápagos trip, I showed you photos of the beloved and iconic blue-footed boobies. Most of those images were made on North Seymour, a small island that’s host to large colonies of the boobies as well as frigatebirds. So let’s continue with the wonders of North Seymour. As our zodiac left the ship and approached this restricted-access island, I was enthralled by the sight of a sky filled with enormous birds soaring over us.

Magnificent frigatebirds (Fregata magnificens) are aptly named, because they are simply spectacular. Most days there were small groups of them soaring above the ship, giving us dramatic close views. With a wingspan of up to 8 feet, this giant seabird is often called a pirate of the sky because of its habit of stealing food from other birds. You see, the frigatebird doesn’t have waterproof feathers like most other seabirds, making it unable to dive into the sea for its food. It can grab fish from the surface with its hooked bill, but more often it seems to prefer taking food from boobies and other seabirds.

The first time I witnessed this thieving behavior was on Kaua’i, where I photographed two great frigatebirds (Fregata minor) forcing a red-footed booby (Sula sula) to drop its food. In this photo you can see the food is falling as the booby squawks its displeasure. After the food is released by the booby, the frigatebird swoops below to grab it before it hits the water. It’s all very dramatic and fun to watch.

On North Seymour we were treated to close encounters with lots of nesting frigatebirds, and got to see their courtship behavior. While they don’t have a cute dance ritual like the boobies do, the male frigatebird has his own unique method of attracting a mate. He inflates his gular sac, a red pouch on his throat, which serves as the signal to all the ladies that he is an eligible bachelor. The island was dotted with males displaying their enormous scarlet gular sacs, eyes looking skyward, each one patiently waiting for a female to choose him.

Once the female selects her mate, the two commence nest building. Usually the female stays on the nest to protect it from stick thieves, while the male goes out and gathers more sticks.

North Seymour island was perhaps one of my favorite places of this entire trip. It was a wild and remote place, teeming with a great variety of animals. And as much as I loved the spectacle of the blue-footed boobies and the frigatebirds, there was another creature on this island that unexpectedly stole my heart.

On other islands earlier in the week, I’d seen lots of tiny lava lizards and medium-sized marine iguanas, but nothing had prepared me for the stunning beauty of the lizards on this island. Meet Conolophus subcristatus, the Galapagos land iguana.

These guys were just everywhere, often right beside the trail resting in the shade as dozens of awed humans walked past them.  Our naturalist guide was counting them, trying to beat her personal high count of about 70 on a one-hour walk. I think we counted almost 50 on this day, and I’m sure we missed plenty of them as we were distracted by boobies and frigatebirds overhead or sea lions on the rocky shores.

Even today, more than a week after the trip, I’m blown away when I look at these lizards. You should have seen them in all their majesty, lumbering across the hot sand and rocks, adorned in the colors of the sun! They make me wish I were an artist so I could draw or paint them. 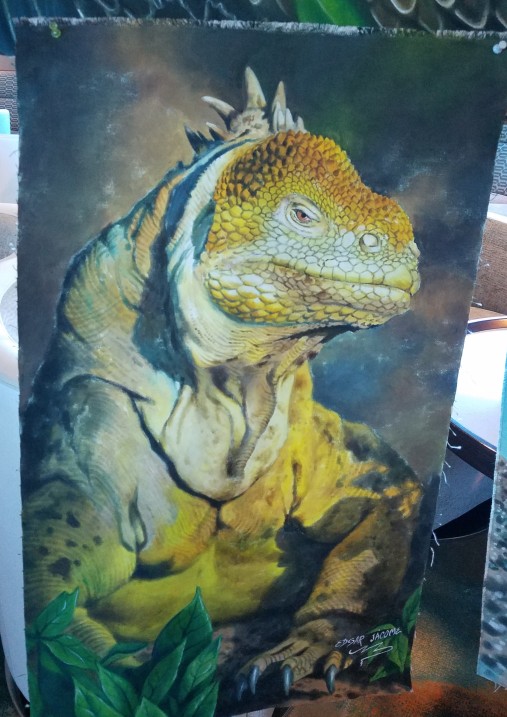 Luckily for me, I was able to purchase an original painting from a local artist to commemorate the feelings I had as I watched these equatorial dragons roaming their kingdom. I can’t wait to get this painting framed so it can hang in my home. I’ve joked with friends that I’m the only person they know with giant photos of dragonflies and other insects on their living room walls…just wait until they see this hanging over the sofa!

This last image isn’t mine; it was taken by one of the ship’s naturalists, and given to us at the end of the cruise, along with hundreds of other photos from the week’s adventures. I like to think that if I’d been allowed to spend more time with these iguanas, I could have come up with an image like this on my own. Maybe one day I’ll get another chance.

These first two posts have barely made a dent in this trip report, so next time I’ll show you even more natural wonders of the Galápagos!

Well, that went by quickly, didn’t it? The anticipation of the Galápagos trip lasted for months, and then it was all over in a flash.  I’m editing hundreds of photos and struggling with how to write about it. There were highs and lows, as there are with any travel experience. The highs revolved around the wildlife, so that’s the part I’m going to write about the most. The less enjoyable parts were things like travel delays, regimented daily schedules on the ship, and a little bit of altitude sickness in Quito.

I’m not going to recap the trip day-by-day, but rather just share my photos and thoughts about the animals. So let’s get started with, what else, blue-footed boobies!

I’d say that, along with the giant tortoises, the blue-footed boobies are one of the most sought-after species by visitors to the islands. Even though they’re found in other parts of the world, they’ve become iconic symbols of the Galápagos.  My first close encounter with these striking and comical birds was when our zodiac boat floated past this one standing on a rocky outcrop at Rabida island. As you can see, the bird showed virtually no reaction to the appearance of 15 humans a few yards away.

That’s one of the most amazing things about wildlife experiences in the Galápagos  — the animals don’t flee when we approach, as they do in other parts of the world.  Most of these islands are so remote and devoid of people that the animals don’t understand that humans are a source of danger. It’s actually heartbreaking to realize that the entire animal kingdom has to fear us; I felt the gift of this precious experience deep in my heart every time I was able to have a close encounter like this. I admit that it was a bit disconcerting to feel joy and sadness at the same time.

Here’s a video of the blue-footed booby courtship dance, one of the highlights of the trip. I giggled at the beginning because it seemed that the female (on the right) leaned over and commanded the male to dance for her. And, as you see, he obliged her. Notice the difference in pupil size between the sexes; the male’s pupil is smaller than the female’s. She’s also larger-bodied than he is, as is common with many birds.

A few minutes later I was supremely lucky to come upon another pair of boobies standing just a few feet from the edge of the trail, and was able to use my cell phone to record them mating!

When the male walked toward me after the completion of his task, it seemed he was seeking accolades for his performance, and that made me smile. What a proud boy he was! (Yes, a harmless bit of anthropomorphizing, I know.)

The male booby makes a whistling sound, while the female’s call is more of a honking sound. Here’s a short clip showing a male whistling:

The population of blue-footed boobies in the Galápagos has suffered in recent years due to a decline in sardines after the 1997 El Niño. You can read more about their struggle for survival here.

We also saw two other species of boobies on this trip, the red-footed and the Nazca booby.

The red-footed booby is the only one to have several color morphs, and it’s also the one most likely to be found nesting in trees rather than on the rocks (at least I think that’s what our guide said). I was enchanted by the pink and blue coloration on the beak of this cartoonish bird and would have loved to have seen one up close instead of 75 feet above me on a cliff, as this one was.

I want to point out that most of my photos on this trip were taken from zodiacs that were bobbing up and down on the ocean waves, so the sharpness of the images is much less than I would have liked. But even so, I hope you enjoy seeing them.

I’ve got much more to show you in upcoming posts…the only penguin in the northern hemisphere, the only nocturnal gull in the world, and the most beautiful lizards you’ve ever seen!

The yellow-collared scape moth (Cisseps fulvicollis) is a diurnal moth with gorgeous black wings edged in pale yellow. Here's one of them sharing a sneezeweed flower with a common eastern bumblebee (Bombus impatiens). They remind me of two kids sitting at a counter, sticking their proboscis straws down into a nectar smoothie.
Happy October! This started as a dahlia, then I applied a Photoshop distortion technique called twirling. Thus the name Twirled Dahlia. #FindingTheJoy #photographyfun #colors #flowernotflower #flowerfireworks #cheerful
So glad fall is here! Sam is illustrating our big plans for the weekend: cozy napping and the inaugural jigsaw of the season. #jigsawpuzzle #sweaterweather #wheresmyblankie #cocooning #turninginward #peace
One of the many great pleasures of fall, sunlit little bluestem on the prairie. #grass #golden #NativePlants #FindingTheJoy #NatureIsMyTherapy #breathe
There's almost overwhelming beauty in my garden now as goldenrods bloom next to purple asters. 😍 Adding to this feast for the eyes, a glimmering striped sweat bee feeds on a New England aster. #FindingTheJoy #pollinators #nativeplants #purple #green #gold #colorful #NatureIsMyTherapy #toledoohio See more #purpleandgold in my new blog post, link in bio.
Monday Blues, my interpretation. 😍😍😍 #BugDork #odonata #InsectsOfInstagram #FindingTheJoy #blue #BlueBugs #Damselfly #zygoptera (Lyre-tipped Spreadwing, Lestes unguiculatus)