When I started birdwatching, my photos were almost exclusively shots of birds on feeders in my yard. When I began to venture out for birding at places away from home, I gradually got better at taking photos of birds in the wild. I have a strong preference for the latter type of photography, showing them in more natural settings.

However, since I’ve got feeders out in my yard this winter, I’m finding it hard to resist making images of the birds who visit for much-needed nourishment in the frigid, snow-covered landscape. Just as they’re taking advantage of an easy meal, I’m taking advantage of a convenient way to capture their pictures. A few days ago I set up my tripod in the kitchen, with the camera pointing out through two panes of not-really-clean glass toward the feeders. And even though I knew these photos wouldn’t be of the highest quality, I shot them anyway.

Why? Because mixed in with the hordes of house sparrows (see my previous post for more about that), there are some more interesting visitors, like this Carolina wren (Thryothorus ludovicianus). This guy is a special feeder visitor because he would normally prefer to be poking around the underbrush gathering insects or berries; only about 5% of a Carolina wren’s diet is made up of seeds. In times of heavy snow cover, like we have now, a supply of suet or peanuts can make a huge difference in the survival of this particular species.

This wren sometimes sits on my brush pile and sings his loud and cheerful song before making brief forays to the suet cylinder. He’s been here for the past two weeks, and I hope he stays for a while longer. I checked my records, and I’ve had this species in my yard for at least six months of the year, in all four seasons.

The other species that I really enjoy is the red-breasted nuthatch (Sitta canadensis). This species is only here in the winter, and there have been two of them here now since November. They’re known to prefer conifers, so I think they’re enjoying my two large cedar trees. In fact, I often see them drop down from a cedar to the feeder (haha, it rhymes). I really love their faces, with the black line running through the eye.

Even though I’m enchanted by the more unusual visitors, I never want to overlook the beauty of “the regulars” in my yard. Downy woodpeckers (Picoides pubescens) are very common and frequent patrons of the suet cakes.

White-breasted nuthatches (Sitta carolinensis), who are year-round residents in my yard, are significantly larger than their red-breasted cousins above. They make dozens of trips to the feeders daily, flying off with their bounty and often stashing it under the bark of one of the maple trees. They have a loud, nasal call that sounds like “yank yank!”

I’m still hoping for some evening grosbeaks to show up; they’ve moved farther south than usual this winter in search of food. I’ve got black oil sunflower seeds out there just for them, so if they happen to pass through the neighborhood they might be lured down for a nice easy meal. Fingers crossed!

Oh, and let’s not forget this guy. European starlings sometimes show up in large flocks to mob the feeders, outnumbering even the house sparrows. The history of the starling in America parallels that of the house sparrow. But that’s a story for another time. For now, just admire his onyx majesty, the way he wants you to. 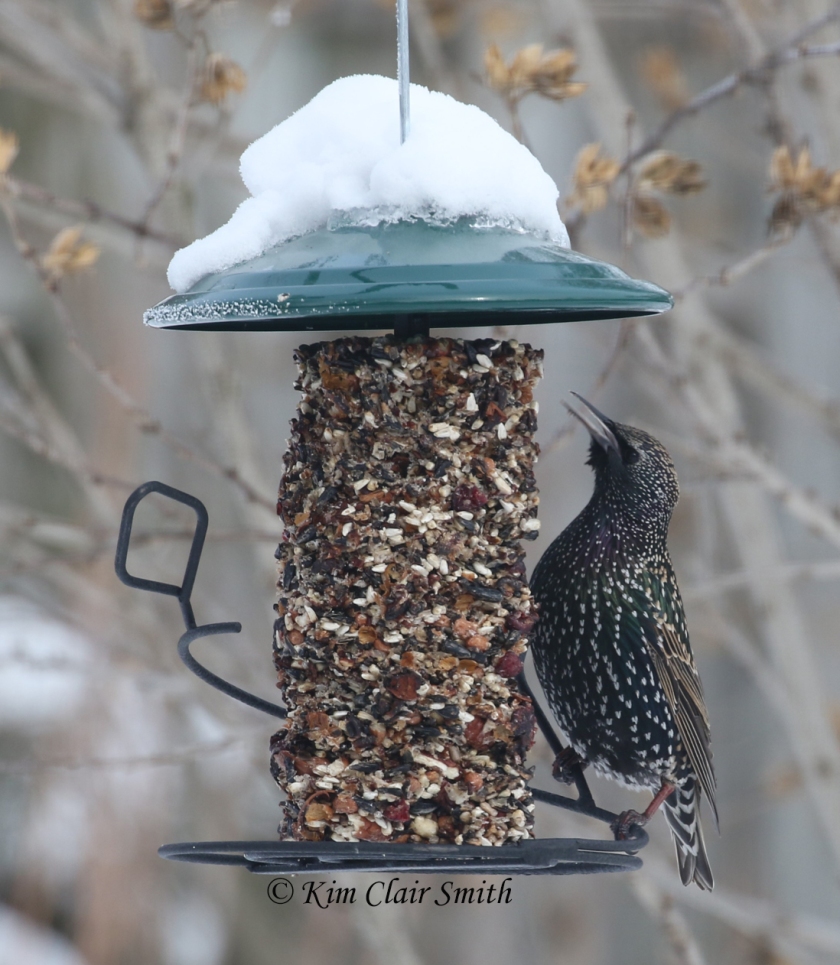