After my walk in the woods today, I stopped to admire the flower garden at my local metropark. It’s a beautiful garden of both natives and non-natives, and I was checking to see if there were any interesting insects hanging out there.  My passion for native plants has turned me into a total bug geek, and I can’t resist looking beyond the simple beauty of the flowers to find the other hidden lives within their parts.

Since I’d been on a fitness walk, I only had my cell phone with me and so I started trying to take photos with it. But it’s terrible at macro shots. And so when I saw something new, I ran to the car for my real camera so I could document my cool discovery.

This is an ambush bug, a member of the assassin bug family. I believe this one is a jagged ambush bug (genus Phymata). This is the first ambush bug I’ve ever photographed, so I was very excited to discover him hiding in plain sight on top of a Black-eyed Susan flowerhead. As the name implies, they hunt by sitting in wait for a hapless victim to wander within reach of their lethal grasp.

After photographing his dorsal side, I slowly moved around to get a lateral view. Often when I’m shooting tiny subjects like this, I can’t fully see the details until I zoom in on the LCD screen on the back of the camera. And as I did that, I had to restrain myself from giggling out loud when I saw this adorable face:

I know, it might be adorable to me, but I wouldn’t want to be a small beetle trundling around those petals, I’ll tell you that. I mean, just look at those forelegs — they give you an indication of the reach he’s capable of.  And little did I know then, but I was about to see one of these guys in action. Well, sort of.

I moved along, photographing other insects, and then came upon another great piece to the story of the jagged ambush bug. I found this second one with a recently-acquired victim! All I can tell is that it’s some kind of bee. As I took my photos, the bee seemed to still be moving slightly, so that’s why I figured I’d just missed the grab. 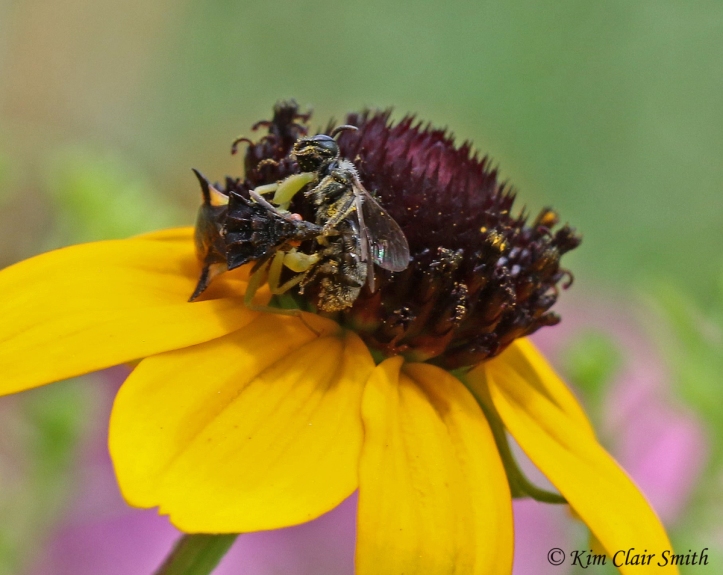 If you look closely at that last picture, you can see the bug’s proboscis stabbed into the bee’s abdomen. After he grabs his prey with those powerful legs, he injects poison that liquefies its insides. The insides are then sucked out through a rostrum, a straw-like structure inside the proboscis. Is that not cool or what?!

Aren’t we lucky these things are so small? With its powerful pincer legs, an ambush bug can easily take an insect up to ten times its size. Imagine a dog-sized ambush bug lurking in the shrubbery as you take your evening stroll…yikes!

Okay, that was a little bit unnerving, wasn’t it? Here’s a nice calming photo of the trail in the woods…take a deep breath…and forget all about ambush bugs. For now, at least.  😉